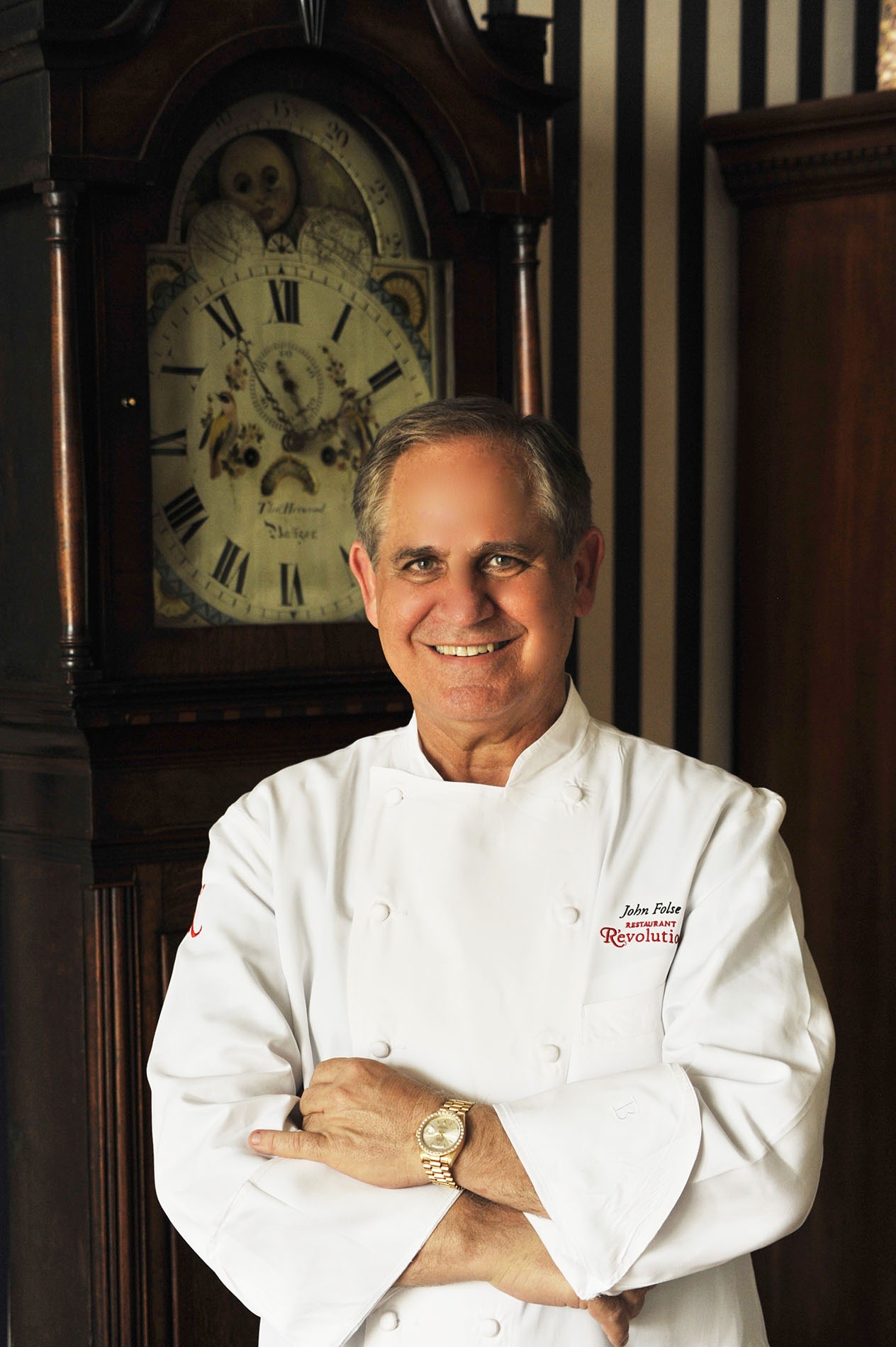 Chef John Folse, born in St. James Parish in 1946, learned early that the secrets of Cajun cooking lay in the unique ingredients of Louisiana’s swamp floor pantry. Folse seasoned these raw ingredients with his passion for Louisiana culture and cuisine, and from his cast iron pots emerged Chef John Folse & Company.

When Folse opened Lafitte’s Landing Restaurant in 1978 in Donaldsonville, Louisiana, he set out to market his restaurant by taking “a taste of Louisiana” worldwide. He introduced Louisiana’s indigenous cuisine to Japan in 1985, Beijing in 1986 and Hong Kong and Paris in 1987. In 1988, Folse made international headlines with the opening of “Lafitte’s Landing East” in Moscow during the Presidential Summit between Ronald Reagan and Mikhail Gorbachev. In 1989, Folse was the first non-Italian chef to create the Vatican State Dinner in Rome. Promotional restaurants also included London in 1991 and 1993, Bogota in 1991, Taipei in 1992 and 1994 and Seoul in 1994. In 1988, the Sales and Marketing Executives of Greater Baton Rouge named Folse “Marketer of the Year” and the Louisiana Legislature gave him the title of “Louisiana’s Culinary Ambassador to the World.”

The Chef John Folse Culinary Institute at Nicholls State University in Thibodaux, Louisiana, opened in October 1994 and is dedicated to the preservation of Louisiana’s rich culinary and cultural heritage. In March 2013 ground breaking ceremonies were held at NSU on the site of the new culinary arts building, which is projected to open in September 2014.  In August 1996, Folse began broadcasting his radio cooking talk show, “Stirrin’ It Up.” In 2001, “Stirrin’ It Up” expanded to a television cooking segment during the 5 p.m. newscast on WAFB-TV Channel 9 in Baton Rouge.

In 2010, Folse announced his business partnership with Chef Rick Tramonto and the formation of the new restaurant development company Home on the Range: Folse Tramonto Restaurant Development, LLC. The partners will launched their first joint restaurant, Restaurant R’evolution, at the Royal Sonesta Hotel New Orleans in the city’s renowned French Quarter in June 2012. Restaurant R’evolution will offers modern, imaginative reinterpretations of classic Cajun and Creole cuisine.  In autumn 2014 Fold and Tramonto will open their second joint venture, Seafood R’evolution, in Ridgeland, MS, a bedroom community of the metro Jackson area.

Folse has received numerous national and international accolades over the course of his 30-plus year career. In 1990, the American Culinary Federation named Folse the “National Chef of the Year,” and in 1999, the Research Chefs Association (RCA) named Chef John Folse & Company “Pioneers in Culinology” due to the efforts of Folse’s culinary research team. He is the only chef ever to serve as chairman or president of the American Culinary Federation (1994), DiRoNA (2000-2001), and the Research Chefs Association (2005-2007). In 2006, Folse was inducted into the National Restaurant Association Educational Foundation’s College of Diplomates. In October 2008, Folse was awarded the Louisiana Governor’s Cultural Economic Development Arts Award. He holds honorary Doctorates of Culinary Arts from Johnson & Wales University in Providence, RI, and Baltimore International Culinary College.

Thirty years of culinary excellence later, Folse is still adding ingredients to the corporate gumbo he calls Chef John Folse & Company, which is as diverse as the Louisiana landscape, and he would not want it any other way. 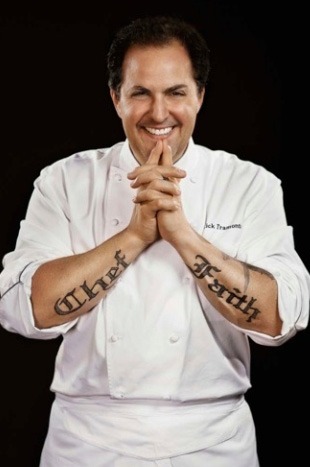 Tramonto grew up in a traditional blue-collar Italian family in Rochester, NY. Due to a family crisis and his struggles in school, Tramonto dropped out of high school and entered the workforce to help support his family. His first job was with Wendy’s Old Fashioned Hamburgers. He then became grill/sauté cook at the Scotch ‘N Sirloin, followed by a stint at the Strathallen Hotel, where he had his first experience with classical French technique, under the tutelage of Chef Greg Broman. Tramonto moved to New York, working at the legendary Tavern on the Green. From there, he joined Chef Alfred Portale at Gotham Bar & Grill and was part of the brigade awarded three stars by the New York Times. He also worked under Chef Gerard Pangaud at Aurora. Tramonto was brought to Chicago by Rich Melman to work at his popular restaurants Avanzare and Scoozi!. Tramonto received a call from London-based restaurateur Bob Payton. Payton asked Tramonto to transform the cuisine at the Stapleford Park. Tramonto accepted the opportunity to live and work in England, France, and Spain, and Stapleford Park was awarded the Michelin Guide’s coveted Red “M.”. Tramonto then reopened the famous Criterion Brasserie in London, and apprenticed with Pierre Gagnaire, Anton Mosimann, Michel Guerard, Raymond Blanc and Alain Chapel.

Returning to Chicago in the early 1990s, Tramonto, along with culinary partner Gale Gand and Henry Adaniya, opened the nationally acclaimed fine dining restaurant Trio in Evanston, Illinois. The restaurant was an immediate triumph, earning Tramonto four-star ratings from the Chicago Tribune, Chicago Sun-Times, and Chicago magazine, as well as Food & Wine’s Best New Chef. Tramonto and Gand went on to launch Brasserie T, publish their first cookbooks and appear on Food Network. The two reunited with Rich Melman and Lettuce Entertain You in 2000 to open the award-winning Chicago landmark restaurant Tru, again attaining a trio of four-star reviews, as well as a Michelin Guide Red “M” and a four-star Mobil rating. Tramonto received the James Beard Best Chef Midwest award in 2002. In 2005, he opened Osteria di Tramonto, Tramonto’s Steak & Seafood and RT Sushi Bar & Lounge in the Westin Hotel in Wheeling, Illinois.

In 2010, Tramonto announced his business partnership with Louisiana native Chef John Folse and the formation of the new restaurant development company Home on the Range: Folse Tramonto Restaurant Development, LLC. The partners will launched their first joint restaurant, Restaurant R’evolution, at the Royal Sonesta Hotel New Orleans in the city’s renowned French Quarter in June 2012. Restaurant R’evolution will offers modern, imaginative reinterpretations of classic Cajun and Creole cuisine. Their second project together is Seafood R’evolution, in Ridgeland Mississippi which opened in 2014.

Tramonto is an accomplished author with eight titles to his credit: His memoir, Scars of a Chef, was published in March 2011. His cookbooks include: Steak with Friends; Osteria; Fantastico!; Tru; Amuse-Bouche; Butter Sugar Flour Eggs (nominated for the 2000 James Beard Award for Best Cookbook in the Baking and Desserts category); American Brasserie(finalist for the Julia Child Cookbook Award).

Tramonto has a long history of television work as well, appearing on “The Oprah Winfrey Show,” “Today,” “CBS This Morning,” “Simply Ming,” and “Iron Chef America.” He was a judge on Bravo’s hit reality show “Top Chef” and a contestant on Season 2 of “Top Chef Masters.”  Tramonto has been featured in publications including USA Today, The New York Times, Wall Street Journal, and People magazine as well as Bon Appétit, Wine Spectator, and Conde Nast Traveler.

Tramonto is a regular at food and wine events nationwide, including Pebble Beach Food & Wine, the Food Network South Beach Wine & Food Festival, and the Aspen Food & Wine Classic. He is active in his church and supports a number of charities, including Feed the Children and Angel Tree. Tramonto splits his time between Louisiana and Chicago, where his wife and three sons reside. 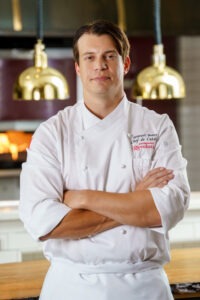 Chef Samuel Peery is a highly trained chef with over ten years of professional kitchen management, specializing in Modern American, Italian, French and Southern cuisine. He holds Culinary Arts degrees from Cook Street School of Fine Cooking in Denver, Coloardo and I.F.S.E. Culinary Institute in Piedmont, Italy as well as a Bachelor of Science in marketing and communications from East Tennessee State University. As chef de cuisine, he will oversee menu execution and kitchen operations, while developing seasonal offerings and extensive tasting menus.

Most recently, Peery worked as the Executive Sous Chef at Martis Camp Club in Truckee, California, overseeing culinary operations for seven restaurant outlets and curating fine dining and bistro menus with a focus on Modern California Cuisine and local ingredients.

In addition to his culinary skills, Peery will use his expertise as a certified Sommelier to showcase Restaurant R’evolution’s world-class wine cellar, which includes an inventory of more than 10,000 bottles of wine.